Free and open-source software (FOSS) has assisted in the spread of emerging technologies, allowing users to utilize freely publicly available software and developers to incorporate third party source code into their implementations. As the number of components in software systems increases, so does the complexity of deciding which license(s) can be applied on the final system, or of checking if there are any incompatibilities among the terms defined in the licenses adopted in the different software components.
Formal lists of licenses can be found in the Open Source Initiative (OSI) and the Free Software Foundation (FSF). A larger license list is maintained by the Software Package Data Exchange (SPDX).

A general rule of compatibility is that old versions of a license are compatible with newer version(s) of the same license, but the reverse is not true. This plus (+) sign used in some licenses means that we are referring to the indicated version of the license or later versions of that. 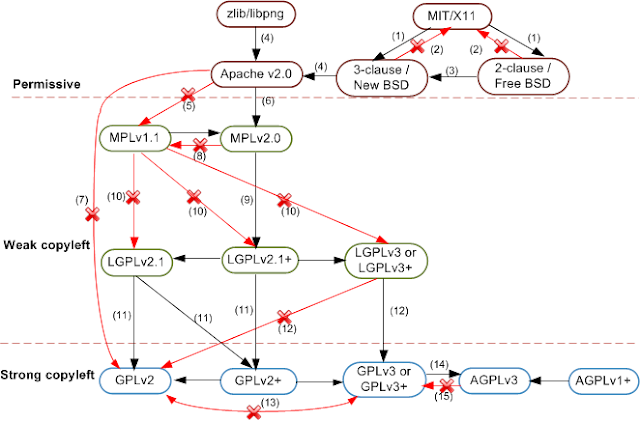 The details of the graph creation can be found in a relevant research publication:
You can also find a previous graph created by David A. Wheeler in the Free-Libre / Open Source Software (FLOSS) License Slide here.

The above information is an indication of compatibility, but for detailed legal advice legal experts need to be consulted.
Posted by Georgia Kapitsaki at 12:43 PM 2 comments:

I am looking into using eXtensible Access Control Markup Language (XACML). XACML is an OASIS standard implementing Role-Based Access Control (RBAC). It captures RBAC policies and specifies a number of architectural entities that can be used for policy definition, control and enforcement.

There is a number of open-source implementations of XACML. A list of them is depicted below, they are all Java-based:

It is helpful to see in which from these three categories each license corresponds. I present in this post the licenses that have been approved by OSI. Please bear in mind that some licenses possess different properties that do not render them 100% free licenses in order to belong non-ambiguously to the categories of permissive or copyleft. Some licenses have a closer meaning to proprietary licenses without the commercial feature, i.e., they cannot be employed for commercial software. Still, characterizing the license as permissive or not makes sense when it refers to the restrictions imposed on the potential license use.

I am listing in this post the licenses that can be currently found in the OSI-approved license list. Since different procedures are followed by OSI and FSF for a license approval process, not all licenses exist in both organizations. Note that the license list in OSI fratures also a license that has been deprecated by its owner: Historical Permission Notice and Disclaimer (HPND). Any comments are welcome.

Constructors and inheritance in Java

For instance, you cannot do the following: